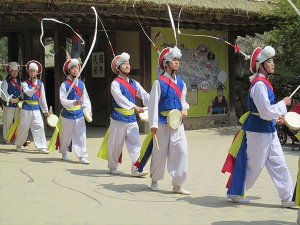 Formed by Rector’s Decree #2970/1 of 3 April 2017 and opened on 1 June 2017, the Department of Korean Studies is the youngest at the FAAS. Nevertheless, the Department may lay claim to an over 120-year history.

Professional teaching of Korean at the Faculty of Oriental Languages of Saint-Petersburg Imperial University began as early as in 1897. That was the year when the Department of Chinese and Manchurian Philology was joined by Kim Byeong-ok, a translator with the Korean Diplomatic Mission who also had a Russian name – Evgeny Nikolaevich. The fact that Korean was not taught as a major did not prevent the publication in 1899 of the first professional Korean textbook in the world.

The life of Kim Byeong-ok, as well as the history of teaching Korean before the October Revolution of 1917, remains shrouded in mystery.

After Korea became a Japanese colony in 1910, the interest to Korea and the Korean Language, understandably, temporarily waned.

The situation changed following the liberation of Korea in 1945. Several departments dedicated to the study of the history, culture, and national liberation movements of the Orient were then founded at the Faculty of Oriental Languages of Leningrad State University. One of the countries that attracted the attention of the Faculty’s leadership was Korea (from 1948 – Korean People’s Democratic Republic and Republic of Korea).

In 1947, the Faculty began regular enrollment into the Korean Philology (Language and Literature) programme, presided over by A. A. Kholodovich, author of the first Russian book on Korean grammar. The Korean History programme was opened in 1947, headed by Prof. N. V. Kuehner, and from 1950 L. V. Zenina.

Korean History majors, meanwhile, studied at the Department of History of the Far East Countries. However, it was only in 1997 that enrollment into the Korean History programme, then supervised by S. O. Kurbanov, became regular.

In the 1950s-60s, apart from A. A. Kholodovich, Korean studies were taught by his former students A. G. Vasiliev, G. E. Rachkov (who went on to become a Tagalist), and Lim Su. The teaching of Korean history was headed by L. V. Zenina.

Along with academic staff of the Faculty of Oriental Languages, Korean studies were also taught by renowned Saint-Petersburg Orientalists, including M. I. Nikitina, A. F. Trotsevich, and M. V. Vorobyev.

Korean studies saw a dramatic change in the 1990s, after Russia established diplomatic relations with the Republic of Korea.

In 2013, the Center for Korean Language and Culture became the Institute of Interdisciplinary Study of Korea (IMIK).

Thus, the over 120-year history of Korean studies at FAAS naturally resulted in the decision to set up an independent Department of Korean Studies.