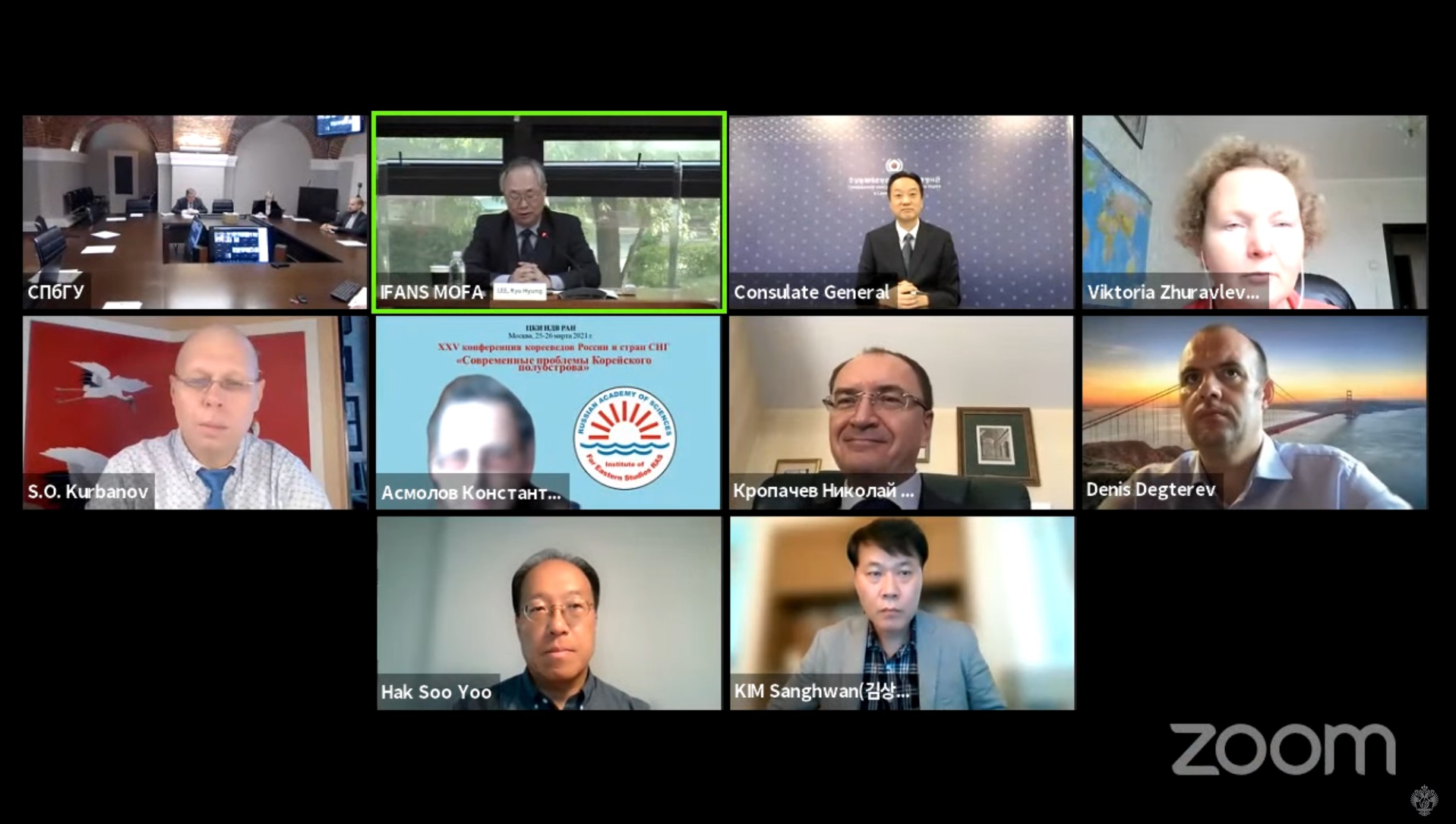 The working group on ‘Politics and International Relations’ has held a meeting on the margins of the ‘Korea – Russia Dialogue’ forum of civil initiatives.  It was devoted to Russia–Korea strategic partnership and North Korean politics of President Biden’s administration.

The session was opened by Lee Kyu Hyung, ex-Ambassador of the Republic of Korea to the Russian Federation and Chair of the KRD Coordinating Committee on the Korean side. He noted that the coronavirus pandemic once again proved that the two countries should continue cooperation in all spheres including health care, politics, economics, and culture.

In his welcoming remarks, Rector of St Petersburg University Nikolay Kropachev, Chair of the KRD Coordinating Committee on the Russian side, reminded that during 31 years of diplomatic relations between Russia and the Republic of Korea no significant political conflicts and disputes have occurred, economic exchange has increased showing potential for future growth, while humanitarian relations, that had been established virtually from scratch, have been actively developing.

The more calamities occur in the world, the more important it is to promote international cooperation.  In such conditions, the countries should become a strategic base for each other, mutually provide possibilities for development and act as partners in current issues of the global agenda.
Nikolay Kropachev, Rector of St Petersburg University and Chair of the KRD Coordinating Committee on the Russian side

Andrey Kulik, Ambassador Extraordinary and Plenipotentiary of the Russian Federation to the Republic of Korea, spoke about: the importance of the North Korean nuclear problem; deficit of trust between the countries; and, as a consequence, potential conflict escalation at the Korean Peninsula underscoring the role of expert discussions in solving these and other problems.

In his welcoming remarks, Byun Chul Hwan, Consul General of the Republic of Korea in St Petersburg, touched upon the ‘Nine Bridges’ strategy proposed by President Moon Jae In that has formed the basis for Russia–Korea relations. Byun Chul Hwan added that the KRD is a reliable platform for the development of a bilateral dialogue.

The first session was titled ‘Recent situation in the North-East Asia and Biden Administration’s foreign policy’.  It was moderated by Eom Gu Ho, Director of the Asia-Pacific Research Centre at Hanyang University, Director of the KRD working group on ‘Politics and International Relations’ on the Korean side.

Konstantin Khudoley, Professor at St Petersburg University, Director of the KRD working group on ‘Politics and International Relations’ on the Russian side, made a report on ‘North-East Asia: new trends in international relations’ at the session.  He noted that the pandemic has exposed four major issues. The first is related to the lack of information on the epidemiological situation in the North Korea. The country has declared no damage from the pandemic. However, there are reasons to believe that it is not so.  Another issue is related to the global economic recession and climate change. According to Professor Khudoley, the issue of transitioning to green economy in Russia was raised by President Vladimir Putin as a federal goal for the first time. Korea and Japan have experience in transitioning to green economy. China is also moving in that direction. Experts say that the key problem is the ‘erosion’ of the system of agreements curtailing the arms race.  It is exacerbated by developing the weapons of new type.

Konstantin Khudoley added that the tension in the region is growing in two directions: competition between the USA and the Republic of Korea that started due to propaganda embracing the elements of arms race and the opposition between Russia and the West, which is less critical for the North-East Asia. The Taiwan problem is ‘an external shock’ with a potential to destabilise the situation in the region.

The second session moderated by Professor Konstantin Khudoley was devoted to the North Korea policy of the Biden’s administration. Professor Sergei Kurbanov, Head of the Department of Korean Studies at St Petersburg University, offered his view on the events in North Korea. His report covered the transformation of foreign and ‘inter-Korean’ policy of the Democratic People's Republic of Korea after several important events: the 8th convention of the Workers’ Party of Korea; the speech by Kim Jong Un on 29 September during the 5th session of the Supreme People’s Assembly; and changes in the Constitution of North Korea in 2019. According to Professor Kurbanov, after these events the Democratic People’s Republic of Korea ceased to be a defence-oriented state. Sergei Kurbanov noted that the DPRK leadership emphasised repeatedly that it is ready to look for compromises and hold the dialogue to solve the North Korean problem. It was demonstrated once again on 9 September 2021, when during the 73rd anniversary of the DPRK a parade of ‘civil and armed forces ensuring security’ rather than a military parade was held for the first time in the history of the country.

Jun Bong Geun, officer at the Korea National Diplomatic Academy, made a report on ‘Biden Administration's North Korea policy and prospects for North Korea-US nuclear negotiations’. Viktoriia Zhuravleva, Head of the Centre for North American Studies at the Russian Academy of Sciences talked about internal factors in the North Korean politics of the current administration of President Joe Biden. Hong Wanseok, Professor at the Hankuk University of Foreign Studies, made a presentation on ‘The peaceful process in the Korean Peninsula and the plan of strategic cooperation between Korea and Russia’.

At the end of the meeting, the directors of the working group thanked all the participants for fruitful work and expressed hope to hold another session this year.